Our Nuffield team had mixed emotions about Ukraine.  The opportunity in the land was apparent but the underlying corruption bubbled through the earth and left a feeling of general sadness.  Perhaps more than anywhere the majority had traveled, Ukraine held the least in terms of hope for women.  Linda Eldridge who has looked at agriculture in dozens of countries summed up the experience by saying: “I found that the women here had less hope than in any other country we had been to, we didn’t see many women in high paid positions and saw most women in labouring jobs that again were the lowest paid positions in society.”  In a conversation just a week ago she remembered the desperation of women who looked for some faint hope to “get out” and be released from the weight of a society that just could not move ahead. 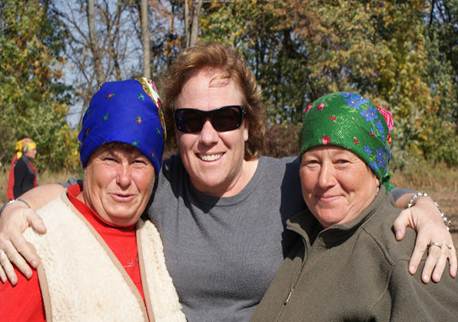 Agriculturally the opportunity is huge in this land of rich black soil, rivers, ports and sunshine.  Logistically the infrastructure is outdated and in poor repair.  The growth of farms depends entirely on the negotiation with small land holders.  A typical example was a host who had to negotiate 3800 annual land leases to secure 10,000 ha.  As there remains a moratorium on foreign ownership, the rebirth of the land market is unlikely to occur.

To succeed in agribusiness in Ukraine takes a special breed of entrepreneur.  Domestic and international businessmen stressed the importance of working with small domestic companies and taking time to develop the needed network.  Visionaries who understand that it takes time and that there are levels of corruption can develop state of the art industry from production through to cold storage.  And they know that product must be value added because there is always the risk of export restrictions and bans. 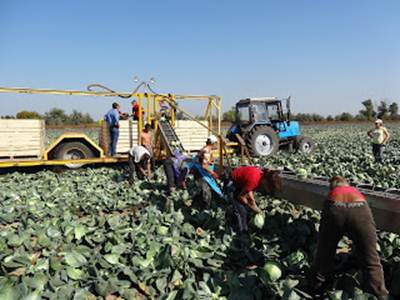 Women harvest cabbage in Ukraine, October 2012. Only three of the five harvesters were working due to labor shortages.
(Photo courtesy of Robin Schaefer)

As we find worldwide, labor woes plague the industry and Ukraine had their share of lost production and harvesting due to labor shortages.  Women make up the workforce and although they are treated poorly, remain the foundation for growth in Ukrainian agriculture.  Keeping costs under control will offset some of the massive inflation which keeps strides with ROI and will help to put the value in value added.  Until there is liberalization within the country and a structure that allows business to flourish without massive risks and huge administration costs, Ukraine will be limited to those who have no fear and are capable of working the layers of corruption and a do not get distracted by the general lack of interest from government and supporting industry.