The basis for my Nuffield thesis report, The Development of Mentorship Programs for Women in Agriculture, is to bring awareness of the value of women in food production worldwide and to empower them to stake their place in agriculture.

As we face a global shortfall in access to food that is magnified by an exploding population, all farmers, but especially women farmers, will experience unprecedented stress in the procurement and development of agricultural products.

Worldwide, women constitute 53% of the agricultural workforce but that rises to 90% in many parts of the southern hemisphere. As in North America, 30% of rural households are headed by women. In many countries the work load of women increases beyond the household and the women are responsible for 80% of all food production. A lack of access to credit, based on their gender, limits inputs and often adds to the weight of being the sole provider while running the farm.

Although a host of societal and cultural issues barricade men and women farmers worldwide the most common is the lack of land ownership. This has been identified by all levels of government and in agriculture as the most pressing issue globally. Land access and control is the ground zero of decision making for what will be produced and ultimately determines the degradation or enhancement of the life of those on the farm. The failure of most countries to address land ownership keeps the potential production of many farms flat, thus adding to the pressures of a strapped food supply system. Although land ownership affects men and women, it is women whom bear the most of this cultural discrimination in the agricultural community.

A failure to address policy that is enabling for women to access the same level of education, technology, credit and land ownership has not prepared farming women for the current and future increases in input costs and challenges in marketing.  Indeed, women farmers in all cultures are facing increased stress without the support of systems that make much needed capital or knowledge readily accessible.  Although consumers around the world are asking for a shorter link between the farmer and the fork, the political environment lacks an appreciation for this potential and fails to recognize that as resources for women increase, so does agricultural production. Earth Times reports that “hungry people could be reduced by 150 million persons per year if women had the same access to technology, education, financial security, markets and access to land.” It is a call for gender equality for that resonates worldwide. The Dairy Women’s Network of New Zealand has stated that “Gender equality is not just a lofty idea. It is critical for agricultural development and food security.”

As rural economies are drained, the role of women in agriculture takes on urgency. In addition to cultural and societal challenges, they face occupational health issues, the task of ecological management and must address the pressure towards monocultures. Although it would seem at first glance that inequality and a lack of access to resources is limited to developing countries the United Nations gives a very candid descriptive of farming women worldwide labelling them all as “undervalued, underpaid and under recognized.” Corporate agriculture also concedes that as we go forward the challenges will be in infrastructure and in land ownership. Without these critical points, the second of which is vital to women of this day, we will continue to see stress and strife in agricultural food production.

The World Bank Group recently identified gender equality as the key to stimulating economic growth. It is simple logic. You have one vote, I have one vote, and that makes us equal. Yet governments struggle with the concept of ensuring food supplies through enabling policy regarding access to credit, education, tools, materials, technology, land ownership and the encouragement of gender equality for women in agriculture. Despite the overwhelming evidence that addressing the issue provides sound economic foundations for families, communities, regions and countries, we continue to watch women farmers struggle. Only when we empower resourceful and committed women and provide for them an infrastructure to market product, will we feed our world. 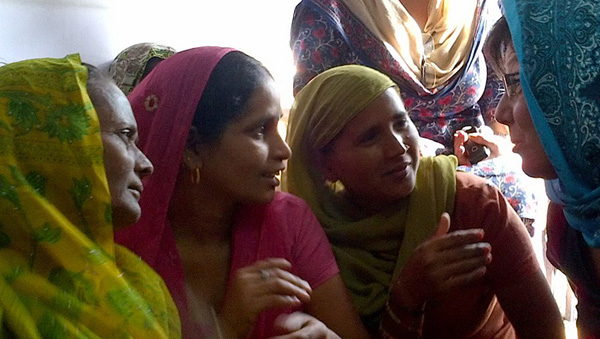